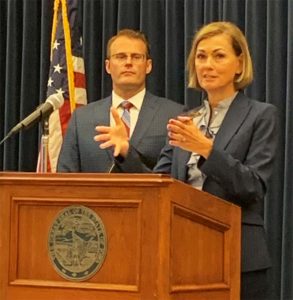 “I absolutely don’t agree with that decision and that’s what the process is for and so we will be appealing that decision,” Reynolds said during a news conference today, “and we’re pretty confident that we can get the outcome that we’re looking for.”

Rita Bettis Austen, the legal director for the American Civil Liberties Union of Iowa, yesterday said the district court judge’s opinion is consistent with the precedent set by the 2018 Iowa Supreme Court ruling.

“We would have no reason to think the court would reach a different outcome,” Bettis Austen said during an online news conference yesterday.

Republicans in the legislature are proposing an amendment to the state constitution that says the document does not recognize the right to an abortion or public funding of the procedure, but it has to clear more hurdles before it would be put to a statewide vote. Some Republicans are hoping the legal dispute over a 24-hour waiting period for abortions in Iowa could be appealed all the way to the U.S. Supreme Court and be the means by which Roe v Wade is overturned. In May, the US Supreme Court struck down a Louisiana law that required doctors performing abortions to have admitting privileges at a nearby hospital.