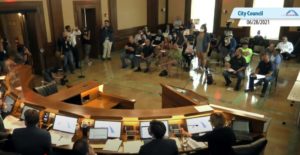 Protesters calling for the defunding of the police department disrupted the Des Moines City Council meeting last night for the second week in a row.

Demonstrators demanded attention to issues like racial profiling and marijuana enforcement. Laural Clinton is part of the racial justice team with Iowa Citizens for Community Improvement.

Clinton says, “It’s not always pretty when you complain, but it’s also not pretty when you’re not heard.” Several people were removed from the council chambers for interrupting the meeting to oppose a contract for police de-escalation training. One person was later arrested. The protesters repeated demands that Police Chief Dana Wingert  and City Manager Scott Sanders be fired. Mayor Frank Cownie confronted the protesters, one of whom stood on her chair and held up a sign.

The council passed a resolution praising the city manager and police chief’s work to reduce racial bias in policing and city services. According to the resolution, the council has no intention of firing either man. Council member Joe Gatto supports the measure which passed unanimously.

Gatto says, “It’s high time in the Des Moines Police Department and other, zoning officers and everyone else that works for the city, it’s high time that we stepped up as a council and be supportive of what they’re trying to do.” The resolution also points to equity policies and police training as signs of progress. Since returning in-person, the city council has adopted stricter rules of conduct.