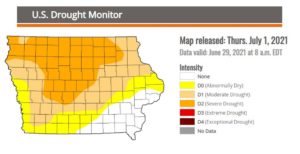 Even with the deluges of rain, hail, and thunderstorms that brought severe flash flooding to parts of Iowa, June wrapped up with below-normal rainfall statewide.

The second half of June brought storms and plenty of them. Parts of southeastern Iowa had heavy downpours, with some areas recording up to 11 inches of rain in two hours. In spite of that, given the long-running drought, the state overall was still lacking for rainfall.

“On the precipitation side, well below average across much of northern Iowa, anywhere from two to four inches below what we’d expect in June, and June is the wettest month for the northern two-thirds of the state,” Glisan says, “so that is a red flag there in terms of drought conditions.”

Forecast models indicate the hot, dry pattern will continue into July. “We do see an elevated signal for warmer temperatures across much of the upper Midwest, including Iowa,” Glisan says, “and then equal chances of above-below-or-near average precipitation across southeastern Iowa, but then a slightly elevated signal for drier-than-normal conditions across northwestern Iowa.”

The latest map released Thursday by the U.S. Drought Monitor shows conditions improving slightly, as the percentage of the state not in drought grew from roughly seven to 14 counties, all in the southeast, while abnormally dry conditions, moderate and severe drought areas all decreased, though slightly.