You are here: Home / Fires/Accidents/Disasters / No safety issues cited in Friday’s inspection of Adventureland ride before fatal accident 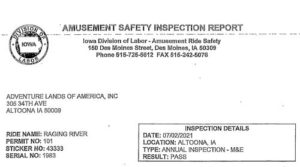 State Labor Commissioner orders Adventureland ride that was the site of a fatal weekend accident closed until an investigation is completed. Earlier today, state officials released five years’ worth of satisfactory inspection reports for the Raging River ride.

The ride was inspected last Friday. The inspector found “no code violations at this time” according to a notation at the bottom of the inspection report. Nineteen different items on the ride are listed as satisfactory, including the chains and belts that run the ride as well as procedures for training the ride’s operators and responding to emergencies.

Inspection reports from previous years were also released, showing the ride has passed safety checks dating back to 2017.

An 11-year-old boy died and his older brother is in critical condition after one of the rafts on the Raging River overturned Saturday. Altoona officials have not released where the children are from, but the Associated Press reports “recent court documents list a Cedar Rapids address.”

The boys’ parents were also injured on the ride. Guy Cook, an attorney representing Adventureland’s owners, said in a written statement that the Raging River ride was voluntarily shut down immediately after the accident. In a written statement issued this afternoon, Cook said safety is “the bedrock” of the park’s operations and “there has never before been a guest fatality associated with the ride.” An Adventureland employee died in 2016 after being knocked into the ride’s canal and repeatedly battered by a raft.