You are here: Home / News / DeJear in eastern Iowa as she explores run for governor 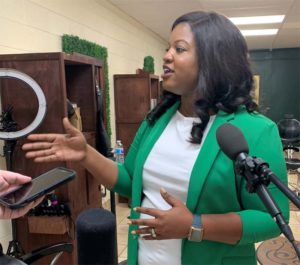 A Des Moines small business owner has embarked on what she describes as a “pragmatic” review of her prospects as a candidate for governor.

DeJear has formed an exploratory committee, started raising money and has embarked on a seven-city listening tour. It started Monday afternoon in Des Moines with a group of small business owners..

“What’s most important about this process is that I hear from people,” DeJear said at the start, “because of regardless of where I go and what I do, it’s important that every decision that I make starts and ends with the vision that the people have for themselves.”

DeJear ran a statewide campaign to be Iowa’s top election official in 2018, getting 45 percent of the vote in her loss to incumbent Republican Secretary of State Paul Pate. DeJear has a group of advisors reviewing her 2022 campaign plan. It would involve winning a Democratic Primary before a General Election match-up against Republican Governor Kim Reynolds.

“I’m not here to take up space. I want this to be purposeful, but I also want it to be pragmatic,” DeJear told reporters. “We’re got dreams for this state, but we’ve also have to make sure that there’s a path to fulfill those dreams.”

Governor Reynolds hasn’t formally announced she’s seeking reelection, but she said in June she intends to do so. If DeJear is the Iowa Democratic Party’s nominee to face Reynolds, she would be the first Black woman elected governor of any state.

“I’m not going to be anybody other than who I am,” DeJear told reporters, “and the only thing I’m going to ask Iowans is to see me for who I am and know that I’ve got your back, because I’m going to see you for who you are.”