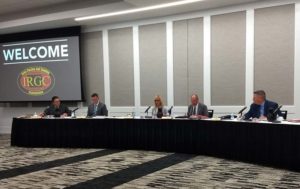 The Iowa Racing and Gaming Commission approved fines for one casino and two sports gambling companies during its meeting Thursday.

The Wild Rose Casino in Jefferson was fined $20,000 after a 20-year-old woman was allowed on the gambling floor.
General Manager Travis Dvorak apologized to the commission. “First and foremost, Wild Rose Jefferson accepts full responsibility for the matter. We take responsible gaming very seriously and we take underage gaming very seriously,” according to Dvorak. “This Tuesday we hit our six-year mark. And I did look — and in the six years we have been open our admissions have been almost 2.7 million — during the 2.7 million, this is only the second violation that I’ve had.”

Dvorak says they should have caught the violation — but says it was a little tougher because the woman’s dad was helping her get in. “The father would go to turnstiles and distract and block, distract the security guard and block the view so the daughter could sneak in. This is something that we are trained for and we should have caught it, so we do take responsibility. But this was serious enough that the DCI charged the father and the county attorney prosecuted the father,” he says.

Dvorak says the father and daughter were persistent. He says the same father-daughter combination tried the same thing eight days later and the father tried to say the daughter was 22, not realizing though the casino had a copy of her driver’s license. “These things go on. These are challenges that we face, but they are our challenges and we do take them seriously,” Dvorak says. Dvorak says this was during the COVID mask requirement and that also complicated the issue. He says they did some additional training with the DCI on making identification when people are wearing masks.

The Racing and Gaming Commission also agreed to a $20,000 fine for the William Hill Sports Book after two betting machines were mistakenly left on, and a person was allowed to use the mobile sports app without in-person registration. The PointsBet Iowa sportsbook was fined $7,500 after the self-exclusion list was not properly updated. A company spokesman says they have made adjustments to meet the requirement.