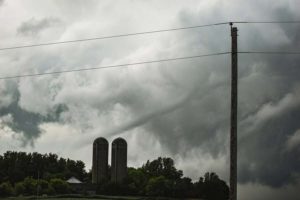 Meteorologist Brooke Hagenhoff says the new combined tally is stunning. “We’re looking at a total, preliminarily, of 26 tornadoes for the state of Iowa,” Hagenhoff says. “That is increased based off of data that we’ve gotten from our neighbors that also have other counties within Iowa. So, the northeast had two tornadoes and then another 12 that occurred across southeast Iowa.”

Tornado near Stanhope and Jewell. (Photo by BTravs)

The total number may actually rise further in the days ahead as the agency coordinates with emergency managers across Iowa and studies high-resolution satellite photos, which will help to refine tornado track details. “So right now, if that number holds at 26, it would be ranked third for the most in one day for the state of Iowa,” Hagenhoff says. “The most is 35. That was on August 31st of 2014, and then April 11th of 2001, there were 28.”

The central Iowa office sent survey teams out on Thursday to inspect the damage at five sites in or near: Lake City, Stanhope, Dysart, Shell Rock, and Waverly. “The strongest one that we have surveyed so far was the Lake City one, an EF-3,” Hagenhoff says. “Right now, it appears that the wind speeds were generally between 136 and maybe up to 145 miles-per-hour and it appears that it was on the ground for about 20 minutes and about 10 miles.”

The other four tornadoes surveyed by the Johnston office were all ranked as EF-1s. Despite the widespread outbreak of severe storms, no serious injuries were reported.

(Photos were sent to and provided by the NWS)