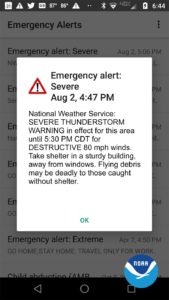 The NWS says a severe storm alert will look like this mockup.

With last year’s derecho, Iowans learned the hard way that highly destructive weather events can be something other than tornadoes or floods.

Krull says, “Any severe thunderstorms that we believe will produce damaging wind gusts in excess of 80 miles per hour or produce hail sizes baseball or larger will now activate the wireless emergency alerts on your cell phones.” Starting August 2nd, the National Weather Service will be able to better convey the severity and potential impacts from major thunderstorms to the public — in seconds.

“Now, they will activate the wireless emergency alerts on your mobile phones,” Krull says. “This will occur for all tornado warnings, as has been in the past few years, for flash flood warnings that are either deemed to be considerable or catastrophic, and now for severe thunderstorm warnings as well.”

On average, only about ten-percent of all severe thunderstorms reach the “destructive” category, things like a derecho or a “supercell” storm. When the rare ones hit, people need to know — and right away — so the alert system is being expanded.
“For most cell phones, it should automatically happen,” Krull says. “Some folks do have the alerts turned off on their cell phones, depending on whether you’re using an iPhone or some kind of Android device, you may want to check the settings for what your wireless emergency alerts are set to.”

The powerful derecho that struck August 10th of 2020 packed winds up to 140 miles an hour — the equivalent of a category four hurricane — and it caused more than 13-billion dollars damage, most of it in Iowa. The storm started causing havoc in western Iowa and moved quickly eastward, doing its worst destruction in the Cedar Rapids area, eventually dissipating in Illinois. In many respects, it was like having a 150-mile long tornado that was 50 miles wide.