You are here: Home / Human Interest / Parts of the USS Iowa submarine coming together in Connecticut 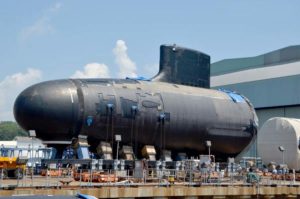 Construction of the next American warship that’ll bear the name USS Iowa is nearing completion.

The 377-foot long nuclear-powered submarine is being assembled in New England, according to Tom Hudson, executive director of the Iowa’s commissioning committee.

“One-hundred percent of the modules are in Grotton, Connecticut, waiting to be fully assembled,” Hudson says. “These submarines are built in segments, so specifically, the forward compartment, which would be the sail and the forward bow section, is actually built in Virginia at Newport News and is barged up the East Coast to Connecticut.”

The submarine’s bow arrived earlier in July and is sitting nearby on the pier, waiting to be mated with the midsection. The submarine should be completely welded together into one massive grey craft by this fall, but it’ll still be a billion-dollar fish out of water.

“By next spring, it’ll be ready to get wet and be christened, at which point it’ll actually be placed into the water,” Hudson says. “There’s a point of completion at that point, but as far as being operational and ready to go to sea and conduct patrols for the U.S. Navy, that won’t be until commissioning which is in the summer of 2023.” 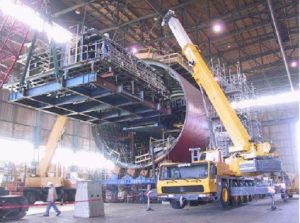 There’s a difference between the christening and the commissioning, and Iowans who are Navy enthusiasts are being invited to both events in the coming years.

“The christening will definitely be in Connecticut and that’s when the shipyard will release the submarine over to the Navy for testing,” Hudson says. “Commissioning is to be determined. We’re really hoping that we can petition the Navy and bring that submarine to the West Coast of the United States and tie her up alongside the great battleship Iowa out in Long Beach and commission it alongside the battleship.”

The battleship USS Iowa was launched during World War Two in 1942 and is now a floating museum in Los Angeles Harbor.

Some of the submarine’s 134 crewmembers have already been assigned, and they’re making visits to Iowa in order to get Iowans interested in the sub.

A team of them rode RAGBRAI this week while more sailors will be visiting the Iowa State Fair next month. “We really want Iowans to become aware of the boat, become aware of the crew, and understand that the namesake Iowa will continue a great tradition in the Navy,” Hudson says. “We really do want folks to participate in those milestone ceremonies.”

The submarine will become the fourth U-S Navy vessel to be named after the state of Iowa. Sailors like to refer to submarines as boats, not ships, and you can follow this boat’s progress on Facebook.