You are here: Home / News / Ernst has visited with grandmother of marine killed in Kabul 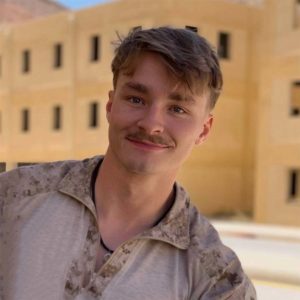 Senator Joni Ernst has talked to the grandmother of the Iowa native who is among the 13 U.S. soldiers killed last Thursday in a suicide bombing at the Kabul airport.

“The family is really hurting right now, but they are very grateful for the expressions of love and support that the communities are sending to them,” Ernst told reporters tonight after an Iowa GOP fundraiser at the Mason City airport.

Marine Corporal Daegan Page grew up in Red Oak and Omaha. Ernst, who is from Red Oak, said she hasn’t been able to speak with Page’s mother, Wendy, who traveled to Dover Air Force Base in Delaware where the remains of Page and the other service members were received, but Ernst has spoken to Page’s grandmother, Peggy, who is a close friend of Ernst’s mother.

“I told her that I loved her. You know, I love the family, our prayers are with them,” Ernst said. “And she told me: ‘Please tell everybody what an amazing young man Daegan was.'”

Ernst said the Marine’s grandmother mentioned Libby, Ernst’s daughter who is a cadet at the U.S. Military Academy at West Point — and told Ernst to give Libby a hug.

“Peggy used to give Libby hugs all the time when she was a little girl,” Ernst said. “And she said, ‘because you never know when you’re not going to be able to give that child a hug.'”

Page’s family has set up a Facebook tribute page in his honor and posted a statement of thanks for the support and generosity of people who are honoring the 23-year-old Marine.