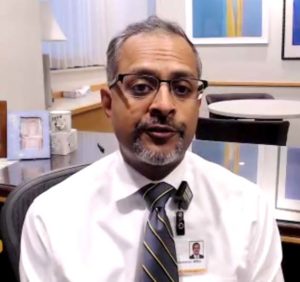 The State Health Facilities Council has reversed its vote of six months ago and approved a plan for the University of Iowa Hospitals and Clinics to build a $230 million hospital in North Liberty.

The 4-1 vote Tuesday reversed the 3-2 denial of the plan in February. The administrators at other hospitals in the area say plan if for the new facility to expand beyond specialty care and take away their patients. UIHC CEO Suresh Gunasekaran says they provide complex treatments beyond what the other hospitals offer.

“So, what we’ve seen is as the Iowa population is aging — not just complex care — but care being delivered for complex patients,” Gunasekaran says. Gunasekaran He says other hospitals are closing their residencies for new doctors while the UIHCwants to expanding by 100 in the next five years — and the new hospital provides more space to do that.

Gunasakren says the new facility will not take away the patients of the other hospitals in the area. “Let’s be clear, over 70 percent of UIHC volume comes from outside of Johnson and Linn County. The patients are not choosing between UIHC and the other hospitals in Johnson and Linn County,” he says. “They are choosing whether to get their tertiary care at UIHCor whether to seek it out of state. Sixty-eight-hundred patients leave Iowa every year for care that UIHCcan provide.”

The CEO of Unity Point in Cedar Rapids, Michelle Niermann was one of those to speaking opposition. Niermann says the plan presented is nearly the same as the one that was turned down. “It has the same potentially detrimental impact to community hospitals — which is what we are here to talk about today. It represents the same governmental entity competing with private enterprise, competing with community hospitals,” Niermann says.

She says the UIHC is trying to expand to take in more patients who need less specialized care while the hospitals in the area have the capacity to handle patients. She says most have more than 50 percent of their capacity available and will continue to struggle as “the University of Iowa seeks to pull and keep care from our system.” Niermann says the UIHC hasn’t shown the need is there for a new facility.

“We’ve heard over and over today that this expansion is necessary for the university to meet the most complex needs of Iowans — yet across 50 slides, three consultants, and dozens of pages of correspondence about their resubmitted application — we still don’t have a specific description of how it addresses needs,” Niermann says.

Several other speakers testified before the state body throughout the afternoon — with both sides at times saying the other was not telling the truth. The members of the Facilities Council asked questions during the testimony, but did not make any comments before taking the vote approving the facility.

The new hospital would be completed in 2025. The opponents have an opportunity to appeal.