You are here: Home / News / Northwest Iowa could be the hotspot as pheasant numbers mirror last year 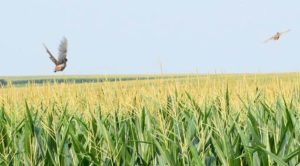 The pheasant season last year saw hunters take the second-highest number of pheasants in more than ten years — and the numbers are lining up for a repeat.

DNR wildlife biologist, Todd Bogenschutz oversees the roadside survey and says one area stood out. “Up in the northwest, it could be some of the best hunting they’ve seen in years,” he says. He says southeastern and eastern Iowa saw fewer birds in this year’s survey — while the overall outlook pretty much mirrored 2020 with an average then of 20.3 birds on each route, and this year they averaged 20.1 birds.

The results showed three of the nine regions — northwest, north-central, west-central averaged at or more than 30 birds on each route — which hasn’t happened since 2007.

Bogenschutz says the spring season is always key in determining how many new birds live into the fall. “I think the nesting season overall was generally pretty good. But last winter was particularly tough on southern Iowa,” according to Bogenschutz. “we had snow, and then it warmed up and melted, and then we went sub-zero and got some freezing rain and that happened a couple of times — to the point that by the end of February in southeast Iowa, full-grown adults were walking on top of the snow, and not breaking through.”

Bogenschutz says he’s not too concerned about the recent flooding, as flooding has the most impact in the spring nesting period.
“So, April into May and maybe the first part of June. After that flooding doesn’t have near the impact once the chicks are out and grown up a little bit,” Bogenschutz says. “The flooding we had in July and August shouldn’t have hurt the newly hatched chicks as much.”

He expects at minimum a repeat of the pheasant harvest from last year. “I’m expecting we’ll have a harvest of around that 250 to 300,000 mark again,” Bogenschutz says. The pheasant season opens on October 30th and runs through January 10th.