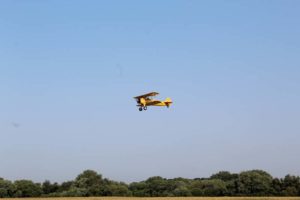 World War Two veterans from Iowa and across the nation are being honored by participating on a flight aboard a biplane.

It is all part of what is known as “Dream Flight”. Darryl Fisher says it started when he helped his dad fly his refurbished biplane from Mississippi to Oregon in 2011.

“So I thought we’ve got to make 15 gas stops, so why see if there is a World War Two veteran at a local facility on our gas stop and we’ll just give them a quick flight and see what happens. And it was amazing. So we gave our first Dream Flight on March 29, 2011. We gave 25 dream flights on the way back,” he says. 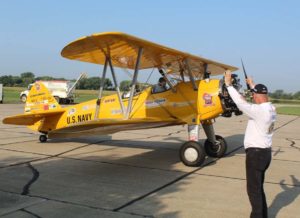 Fisher says the biplane used for the “Dream Flights” helped prepare those we were going to war. “This biplane had one mission. They were built between 1940 and 1945 and they were designed to teach pilots to fly in World War Two, that was it,” he says. He says they decided to change things up this fall in honor of the end of World War Two, which came in August.

“In 1945 they signed the surrender agreement with Japan. So we said hey, let’s start flying August 1, we’ll finish flying on September 30, and we’ll call it Operation September Freedom. We’ll take our six airplanes and barnstorm across the country and fly as many World War Two veterans as we can in 60 days,” according to Fisher.

Each flight is about 20 minutes. Upon completion of the flight, the World War II veterans are presented with a cap, thanked for their service to their country, and are asked to sign their name on the tail of the airplane. D

ream Flight flew veterans in Le Mars and Sioux City last week, and they are scheduled to honor other World War II veterans at Vinton and Ottumwa today and Moline, Illinois on Tuesday.