You are here: Home / News / Some dogs now having trouble being home alone 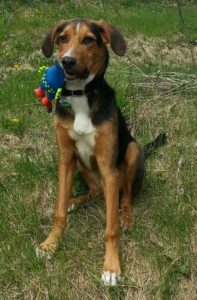 Jack Fitzjunker, who runs Dog Training Elite of Des Moines, says many Iowans adopted dogs during the worst days of the pandemic, but now the kids are back in school and most adults have returned to in-person workplaces, so the suddenly-lonely canines are acting up.

“It’s difficult for them, for sure, especially when you’ve spent the last year, year-and-a-half, spending all of your time with that dog,” Fitzjunker says. “It’s definitely a big change for them and a lot of dogs struggle with that quite a bit because it’s something new, something they’re not used to and a lot of dogs aren’t fully prepared to handle that.”

The separation anxiety is often worse for high-energy, working dogs like German shepherds and border collies, he says, and the warning signs are varied. “They’ll do some howling, barking, they may whine,” Fitzjunker says. “They could have indoor accidents even though they are housebroken. They may chew things up, dig holes, scratch windows and doors. Pacing is something I see a lot or they could just try and escape.”

You can’t go from spending all of your day around a pet to being gone for eight or nine hours at a time, the trainer says. To begin with, he suggests a combination of physical and mental exercises for the dog.

“Before you go to work and leave for the day, taking your dog for a long walk is a good option, taking them to the park and throwing the ball,” Fitzjunker says. “Also, basic obedience type of stuff, getting some of that mental exercise in as well. That’s a great starting point.”

It may also help to take “baby steps” with the separation. Try leaving the dog for five or ten minutes, then returning, and taking progressively longer trips away to help the dog adjust to being alone. He notes, it’s good for dogs to have some alone time as it gives them an opportunity to rest and recharge.