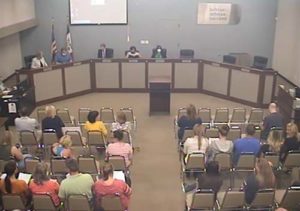 Students in the Sioux City Schools won’t have to wear masks after the issue failed to get votes at a special school board meeting Wednesday.

The board heard more than two hours of discussion from more than 20 people in person and by phone — and then board vice president Monique Scarlett made a motion. “I move that all students, staff, visitors be mandated to wear a mask in district buildings. This includes audience members in extracurricular activities, and as participants in any meetings held within district buildings,” Scarlett said.

There was no second to that motion — which caught the board president Perla Alarcon-Flory by surprise. Alarcon-Flory asked what happens without a second and other board members said “We don’t vote on it.” Board member Taylor Goodvin and two others had indicated during the meeting that they would not vote for the mask mandate in part because an overwhelming number of teachers had told them that they did not want it.

Goodvin praised Scarlett for taking a stand. She replied, “That’s okay, I will sleep well at night. I did the right thing, I stood on and politics pushed me into a corner,” she said. “I know you will,” Goodvin replies.

Goodvin also talked to the others at the meeting. “People who came here and respectfully voiced their opinion — I commend you,” Goodvin says. “The people who didn’t — I hope your kids don’t see it. The kindergarten teacher back there — I guarantee you that her students would have acted better.”

The union representing the teachers had declined to take a position on the issue. Board members agreed that they would continue to monitor the COVID numbers in the district and could revisit the issue if future numbers worsened.