You are here: Home / News / Ernst pressing to get Global War on Terror Memorial a spot on National Mall 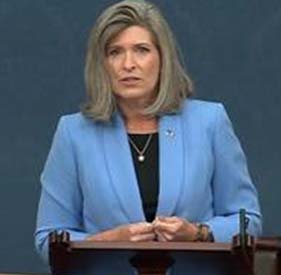 Republican Senator Joni Ernst says the proposed Global War on Terrorism Memorial in Washington, D.C. should be built in a “place of prominence,” near the iconic memorials on the National Mall honoring soldiers from Vietnam, Korea and World War II.

“How could we put the memorial for our nation’s longest war anywhere else?” she asked Monday night during a speech on the Senate floor.

Ernst, who served 23 years in the Iowa National Guard and did a tour of duty in Iraq, is urging senators to override a 2003 federal law that prevents new memorials from being built in an area of the National Mall known as The Reserve.

“While nothing will ever restore the lives we’ve lost, this memorial would serve as a tribute to those brave men and women and their loves ones who have sacrificed in defense of our freedom,” Ernst said. “…This national memorial will provide all Americans a permanent place of reflection in the heart of our nation’s capitol.”

In 2017, congress passed bipartisan legislation creating a Global War on Terrorism Memorial Foundation to begin planning for construction. Last night, Senate Democrats blocked a vote on Ernst’s proposal to require construction on the National Mall. Senator Joe Manchin, a Democrat from West Virginia, said erecting a memorial in D.C. to honor soldiers who’ve served since 9/11 is “a high priority,” but Manchin said a law passed in 2003 prevents it from being located in “The Reserve” where 17 other memorials, monuments and museums are located.

“I believe this precedent would reopen the fight to locate other memorials on the National Mall and create more controversy that will ultimately delay the construction of this memorial, which is much needed,” Manchin said.

Manchin said the Desert Storm and Desert Shield Memorial to honor soldiers who fought in the first Gulf War will be built in “a high profile” area near the Lincoln Memorial, but not in the area of the National Mall that’s been designated as The Reserve.