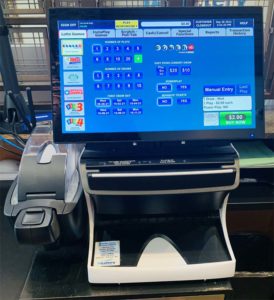 The Iowa Lottery is exploring some ways to make purchasing its products easier for customers.

Iowa Lottery spokesperson, Mary Neubauer, says the effort is spurred by all the changes in retail brought on by the pandemic.
“Just making everything as convenient as possible. In the retail setting something that is an impediment to the process is called friction,” Neubauer says, “so you are trying to do everything that you can to remove friction from the process of selling your product.”

One thing the Iowa Lottery is exploring is having “in-lane” sales of Powerball or Mega Millions tickets. She says customers would get what are called “hang tags” in the aisle and you can scan it and a ticket would print out right in the lane so you don’t have to go to another location in the store. This change could also help retailers, as they now have to dedicate employees to work the counter where tickets are sold.

Neubauer says they started considering this as they planned the upgrade to their operating system that was just completed.
“We’re very early in the investigation portion of this particular project. And obviously, we needed to get our new equipment in the field so we could build toward these new convenience factors in the future,” she says.

With sports betting now happening on phones and other devices — online purchases of lottery tickets seems like the next step as well. Neubauer says moving in that direction is a policy decision that state lawmakers will have to make. “But in terms of making sure the Lottery is keeping up with technology advances — that’s definitely something we need to do in terms of in-lane sales — or investigating other ways we can just make the process of purchasing our products easier and more convenient for customers,” according to Neubauer. “It’s all part of a bigger conversation, but the actual decision about going online– that’s something for our state policymakers and state lawmakers to make. But there are many other things we can do in the meantime to make it as convenient as possible for customers, and that’s what we are trying to do right now. ”

The Iowa Lottery saw record profits during the last fiscal year, with scratch tickets leading the way. Sales of the national lotto games have lagged.