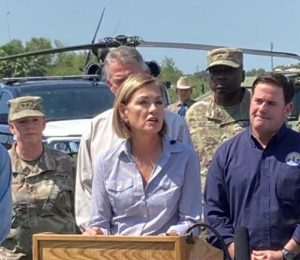 Governor Kim Reynolds says her trip to Texas with nine other Republican governors has given her a better understanding of the escalating humanitarian and security crisis caused by illegal border crossings.

Reynolds was in McAllen, Texas, when she spoke with Iowa reporters by phone Wednesday afternoon.

The ten governors are calling for a surge in federal agents along the border. “They need to dedicate federal resources to stop the human and drug trafficking that is taking place at the border,” Reynolds said. “…It is unbelievable what they’re seeing.”

In July, Reynolds sent more than two dozen Iowa troopers to Texas and she’s not ruling out another deployment if the Republican governor of Texas again asks states for assistance at the border.

The governors are also calling on the Biden Administration be more transparent when migrants detained at the border are sent elsewhere. Reynolds mentioned how state officials were not notified when a flight carrying 19 unaccompanied girls landed at the Des Moines airport late one night in April.

“They need to let governors know when they are sending illegals, migrants as well as unaccompanied children into our state because I become responsible for that,” Reynolds said. “My number one priority is to protect the health and safety of Iowans.”

“No it’s not a political stunt. This is the real thing,” Reynolds told Iowa reporters. “Biden owns this. This is a self-inflicted crisis. He overturned all the politics that worked.”

Reynolds cited a dramatic jump in fentanyl seizures in Texas and she said the illegal narcotic is being added to drugs like marijuana and opioid pills, leading to overdose deaths. “So if you think this is a political stunt, then people had better wake up because this is what’s coming across the border,” Reynolds said. “This is what’s coming into our states.”

The Republican Governors Public Policy Committee covered transportation costs for the group. The State of Iowa is paying about $500 for lodging in Texas for Reynolds and her staff.