You are here: Home / Agriculture / Fall bug issues starting to pop up 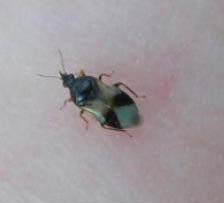 Bugs are starting to become more of a nuisance as we head into fall.

Iowa State University Entomology Professor, Donald Lewis, says minute pirate bugs help the environment until this time of year when they can cause humans pain.

“Now there’s not much out in the field for them and they wander around looking for something moist,” Lewis says. “And if you happen to be on your ladder in your short-sleeved shirt painting the white side of your house — they’re going to find you, and they’re going to be attracted to the reflective light. They are going to taste you to see if are you an insect egg, or are you a source of moisture. And that’s why they bite.”

Lewis says boxelder bugs can also cause nuisances this time of year as they prepare to hibernate during the winter. “One cheap and easy way to control boxelder bugs outdoors is to spray them with soapy water,” he says. That keeps them under control in the short term.

“Now that has no residual. That will not control the boxelder bugs that come an hour later. But the ones that are there now, the ones that are massed in the late afternoon, you can kill them with a soapy spray, but you are going to have to do it probably every day for best results,” according to Lewis.

Lewis says the Minute Pirate Bugs will die once the freezing temperatures come.