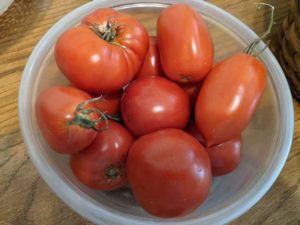 Warm weather is holding off the killing frost that would end the vegetable growing season. (RI photo)

There’s a potential for frost in some areas of the state, but State Climatologist Justin Glisan says that’s been a rare occurrence so for this fall.

Frost happens when temperatures get down to 32 degrees, and the killing frost that ends the growing season happens at 28 degrees. “About two weeks ago we had a few stations report 32 degrees for their morning lows. But interestingly enough, last week we actually had some stations report low temperatures that were actually equivalent to the climatological daytime highs,” Glisan says. “So our overnight lows have been very warm — combined with our daytime highs — we are running about nine degrees above average for the first 15 days of the month.”

Glisan says we usually see more of the light frost this time of year. “It’s unusual that we haven’t seen widespread conditions like that — but that is a function of where we are in terms of the outlook of the forecast given the large scale setup,” he says. He says the setup over the midwest has kept things warm.

Glisan says the forecast doesn’t show any signs of the potential for the hard freeze — though parts of the state are in the time frame where that normally happens. “If we look at the northern part of the sate — that’s where we see the first frost and killing freeze because it’s further north with cooler temperatures. So basically, mid to late October is where we should see the first killing freeze — that 28-degree threshold or below,” according to Glisan.

Farmers worry about an early frost ending the growing season before the crops can mature. Glisan says that hasn’t happened this year — gardeners are getting a bonus. He says the perennials, tomatoes, peppers, and flowers will continue to grow as there is no hard freeze in the near term outlook.

Glisan says you can keep getting your fresh veggies for a while.”Enjoy them while you can, but it looks like we still have a little bit to go,” Glisan says.

The National Weather Service issued a Frost Advisory covering 14 counties in northwest and western Iowa from 2 to 10 a.m. tomorrow. People in those areas will need to protect tender plants or they may get nipped.