You are here: Home / News / Current and former Iowa governors weigh in on Deere strike 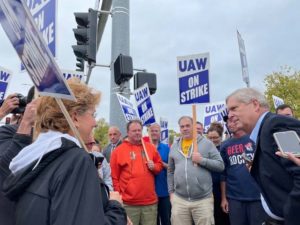 U.S. Agriculture Secretary Tom Vilsack has visited the picket line outside the John Deere plant in Ankeny. Vilsack told the UAW members he’s there for them because they were there for him 23 years ago.

The union endorsed Vilsack’s successful 1998 campaign for governor when he was trailing in the polls and Vilsack said that’s something he won’t forget.

Vilsack, a Democrat who served two terms as Iowa’s governor, later told reporters he hopes the strike is resolved quickly and fairly.

During a news conference earlier today at a manufacturing plant in Adel, current Republican Governor Kim Reynolds said she’s confident the union and the company will come to some resolution.

“John Deere is a great company with a phenomenal workforce,” Reynolds said, “and this is part of the collective bargaining process.”

“I’m just hopeful that we can find resolution sooner rather than later,” Reynolds told reporters.

Deere & Co. operates plants in Ankeny, Davenport, Dubuque, Ottumwa and Waterloo. The union is seeking better pay and health care benefits as well as an end to a two-tiered system that pays workers hired in the past 24 years less than those hired before October, 1997.