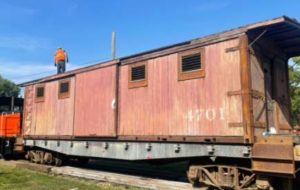 This railcar is being redone to portray cars used to move people to Nazi concentration camps. (photo from Tolerance Week website.)

Sioux City’s railroad museum is refurbishing a vintage boxcar to turn it into a replica of the cattle cars that the Nazis used to transport European Jews to concentration camps.

The idea came out of the annual “Tolerance Week” — which for 17 years has annually brought Holocaust survivors to Sioux City to visit local schools to educate children about their history. “And we all thought, what if we brought a railcar up here, and create a Holocaust museum where it is not just one week? So we are going from one week of education to potentially nine months,” Boardmember Kelli Erickson explains.

The railcar will be part of a permanent museum exhibit known as “Holocaust Rails, Desperate Passage.” “And it’s very, very important education for us to share. How did this happen, who are these people, how did people let it happen?” she says. “There are answers to all of these –and the survivors — the stories of the survivors, very inspiring.” The finished cattle car will be the centerpiece of the only Holocaust exhibit in the midwest.

“One survivor has been quoted that the railcar symbolized their transition from being human beings to being numbers that could be disposed of at any time. It’s a hub, the very center of what we’d like to create,” she says. The boxcar was purchased in southwest Iowa.

Humanities Iowa and the National Endowment for the Humanities are partnering in the project. They plan a fundraising campaign for the overall project — and hope to have the exhibit ready by the fall of 2022.