You are here: Home / Sports / Iowa State’s Purdy and McDonald honored by Big 12 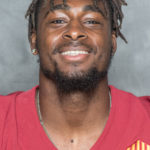 Iowa State senior quarterback Brock Purdy and junior defensive end Will McDonald IV were honored by the Big 12 Conference for their performances in a 24-21 victory over Oklahoma State.

Purdy passed for 307 yards, his 13th career 300-yard passing game, on 27-of-33 passing. He also tossed a pair of touchdowns to Xavier Hutchinson and helped orchestrate a fourth quarter come-from-behind victory for the seventh time in his career.

With the Cyclones clinging to a 24-21 victory late in the fourth quarter, McDonald IV registered back-to-back sacks to force a Cowboy punt.

McDonald IV leads the Big 12 and ranks fourth nationally in sacks per game at 1.07. His 7.5 sacks on the year already ranks in ISU’s season Top 10 and his 25.0 sacks in his career is 0.5 shy from the school record.