You are here: Home / Education / Iowa State to honor former students who served in WWII 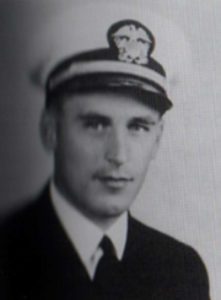 A ceremony will be held this afternoon at Iowa State University to honor three former students for their military service during World War Two.

One of those who will be honored is William Ostlund of Webster City. His nephew, Chris Ostlund, says the Japanese attack on the U.S. bases in Hawaii on December 7th of 1941 was the turning point for his uncle.

“After Pearl Harbor, he enlisted and decided to go into the submarine service because he knew that was something that was difficult and he thought the challenge would be great.” Ostlund joined the U.S Navy in February of 1942 and was assigned to a sub, the USS Gudgeon.

Many stories have been passed down about Ostlund’s Uncle Bill. “He had aspirations actually to go into politics after World War II and in a sense, he knew that the submarine service would look good on his resume,” Ostlund says, “but of course, he also wanted to serve the country and was very angry at what happened and wanted to go fight the enemy.”

The Gudgeon and its crew of 81 were lost at sea in 1944 and it was never found, but years later, a Japanese pilot documented sinking an American submarine that April, which was presumed to be it. Ostlund says this ceremony is a wonderful — and somber — time for him and his relatives.

“We have family coming from literally all over the country to attend, a whole bunch of Ostlunds,” he says, “so it’s a unique opportunity for all of us to get together and maybe have our own closure as a family, as a group, that never was alive when the memorial service for Uncle Bill took place in 1946.”

The service will also honor Robert A. Berwick of Knoxville who studied chemistry at Iowa State from 1940 to 1943. Berwick joined the U.S. Navy in the fall of 1943 and was killed off the coast of Okinawa in 1945.

The ceremony is scheduled for 3:15 p.m. at the Memorial Union Great Hall. The event is open to the public.