You are here: Home / News / Big change coming in the weather 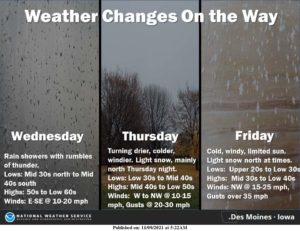 Today is going to be the start of a downhill slide for temperatures in the state which have been unseasonably warm.

National Weather Services meteorologist, Kenny Podrazik, says that’s going to change as cold air moves in. “We’ll still be in the 50’s for a good chunk the state — lower 50’s up north — and then mid-upper 50’s and even a couple of 60’s across the south-southeastern part of the state,” he says. “So, another nice day before we get the bottom dropping out as the rain starts to move in Wednesday.”

Podrazik says we had a nice run of warmer than normal temperatures. “We just had kind of had this thermal ridge over us providing some nice warm air into the state. Every now and then we will get these types of high pressure over us and provide some late-summer weather, so to speak,” he says.

He says the rain will start early Wednesday. He says it looks to be moving in from the west and really spread and cover much of the state by the afternoon and evening Wednesday. “Thursday night into Friday we could see some snow showers across the northern part of the state Thursday into Friday,” Podrazik says. He doesn’t expect any accumulation of snow.

Podrazik says if you haven’t gotten your winter coat out yet — you’ll need it by Friday. “We’re looking at wind gusts between 30 and 40 miles-per-hour. And temperatures are going to be really dropping throughout the day,” he says. “Highs are going to be struggling to get to the high to mid-upper 30’s Were talking wind chills in the afternoon in the 20’s — low 20’s.” After a series of warm weekends for fall yard work — this weekend is one where people will probably stay inside.

“We’re looking at highs Saturday and Sunday middle 30’s north to lower 40’s south, and then the overnight lows are going to be ranging in the 20’s. Certainly typical mid-November weather,” Podrazik says.

While the temperatures will drop — they won’t be anything like 1991. The N-W-S says unusually early bitter cold temperatures settled across Iowa on November 7th and 8th of that year with most stations experiencing their earliest subzero temperatures on record. Low temperatures on the 8th included -2 F at Burlington, -8 F at Bedford and Grinnell, -11 F at Sac City, -12 F at Atlantic and Le Mars, -13 F at Cherokee and Perry, and -14 F at Guthrie Center.