You are here: Home / News / Floyd of Rosedale sculpture dedicated ahead of battle for trophy 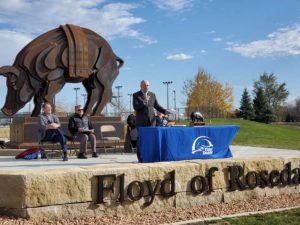 When the Iowa and Minnesota football teams meet tomorrow, the victors will take home the bronze Floyd of Rosedale Trophy.

A larger-than-life iron sculpture of Floyd the Pig was dedicated in Fort Dodge this week. City council member Dave Flattery says that hog was raised on the Rosedale family farm in Fort Dodge decades ago. He says the statue aims to keep that story alive.

“If you were to go there now, there’s not a story plate yet,” Flattery says. “There is a donor wall, but we intend to — and it’s in the works — to put a plate or plaque to tell the story about Floyd of Rosedale, the pig, and all of the characters that were involved back in 1935.”

The trophy stemmed from a bet between the governors of the two states who agreed to wager an actual pig over the game’s outcome. Back in Fort Dodge, Flattery says the giant metal pig was crafted by a sculptor from eastern Iowa.

“He’s out of Mount Vernon and his name is Dale Merrill and the company that he owns is called Liberty Iron Works,” Flattery says. “If you see his portfolio of work, he’s got a lot of good sculptures and artwork throughout eastern Iowa, through Cedar Rapids and that area, and we’re very pleased with the work that he did.”

Flattery says they plan to install lighting and security cameras at the sculpture site. Attendees at the unveiling ceremony on Tuesday included former Iowa Governor and Ambassador Terry Branstad, and the broadcast voice of the Iowa Hawkeyes, Gary Dolphin.