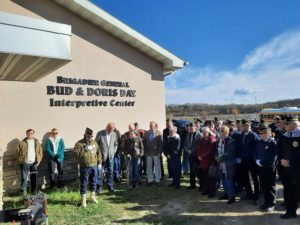 One of the ceremonies on Veterans Day honored Iowa military hero George “Bud” Day of Sioux City, and his wife Doris.

The event was a ribbon cutting at the Interpretive Center at the Siouxland Freedom Park in South Sioux City. Day’s son George Junior was at the ceremony.

“When I think of our dad’s legacy and our mom’s legacy — and the fact that in a way we are honoring them — but more importantly we are honored by the people of this community in America and what it’s doing to inspire the youth of future generations,” he says.

Brigadier General Day received the Congressional Medal of Honor for his service after being shot down over Vietnam and put in a prison camp. He was tortured, escaped, and was caught and tortured again. “It’s incredible to hear him talk about that and then share it with others. One of the biggest things that he shared was his faith in God,” Day says. “He never expected to survive in Vietnam. He never expected to live as many years as he did. He never expected to live through two bailouts in fighters. And yet, God kept him on this earth for a reason, and we are so thankful for that.”

His children grew up without him while he was in the prison camp until the war ended. His daughter Sandra wore his flight jacket to the ceremony, and says she didn’t realize for a time what her dad had gone through. 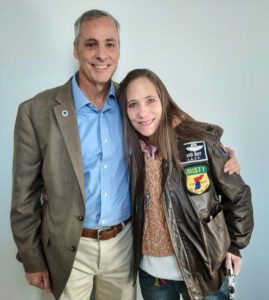 “Probably my biggest revelation was when I actually sat down and read his book. Then it really hit home about what he went through and how bad it was,” she says. Sandra learned more about what he endured in the North Vietnam prison camp as she took care of her dad.

“In taking care of him when he was sick I could see the lash marks on his back. And that was really difficult — when you see it like that and you realize what it is — that really brings a new meaning to freedom and a meaning to torture and what he went through,” Sandra says.

George Junior graduated from the Air Force Academy in 1985 and went on to become an F-16 pilot. He later flew plans for Southwest Airlines after leaving the military.