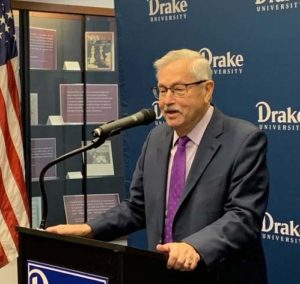 Former Governor Terry Branstad says as President Trump’s ambassador to China, he routinely accepted criticism of the United States from Community Party officials in a formal setting. Branstad says the process has a name in diplomatic circles. It’s called a demarche

“A demarche is getting chewed out by the other country,” Branstad says. “…I represented the United States of America. I’m the highest official there, so the Chinese would call me in to the Ministry of Foreign Affairs and they’d call me in to chew me out…and then I’d dutifully promise to deliver that message to the president.”

Branstad was called to hear complaints about statements other Americans were making about China or if someone from Taiwan had visited the United States.

“When Uighurs are denied their religion or their culture in Xinjiang, China, or if the people of Hong Kong no longer have freedom of speech or assembly, that’s of concern to us. Unfortunately, the Chinese have a different viewpoint on that,” Branstad says. “They look as what’s happening in Xinjiang or Hong Kong as their internal business and we have no business even asking about it.”

Branstad, who held weekly news conference when he was governor, says as an ambassador, it was often frustrating to clear his own public statements through the U.S. State Department.

“There were times when the Chinese said something that I wanted to counter and it’s 12 hours difference between Beijing and Washington, D.C., and then it would take two or three days to get it cleared,” Branstad says. “By that time, it might be too late.”

Branstad says he’s able to freely talk about much of his work in China, now but some of it must remain top secret. Branstad hosted China’s president twice in Iowa, once in 1985 when Xi Jinping was a lower-level community party official and then just before Xi became president of China. Xi uses the phrase “old friend” to describe Branstad and others, including President Biden.

“The Chinese term ‘old friend’ is kind of a term of art for them. If they have known you for a long period of time and you’ve had a good relationship, they call you an ‘old friend,’ so Xi Jinping calls me an ‘old friend’…because we treated him very well and he feels real good about it,” Branstad says. “I think that’s a good thing, having that personal relationship.” Branstad, who is 75, has set up an office on the Drake University campus and has been given the title of “ambassador in residence.” He is planning to host a conference and U.S. and Chinese relations next October.