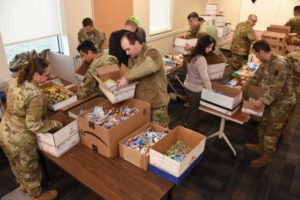 Members of Sioux City’s 185th Iowa Air Guard refueling wing put together holiday care packages to send to the family members who have a member of the unit on deployment.

Master Sergeant Stephanie Bowen says the 185th’s Family Readiness Office led the effort as a way to recognize the contributions made by family members during the holiday season.

“It isn’t just a member who is leaving — it also the family who is left behind and also taking on new roles,” she says. Bowen says every deployed member has already received care packages from other organizations and 185th wanted to use some of the many donated items to do something for the unit family members.

“We have anything from your drink mixes to candy bars to toys. Carmel corn came  from the Boy Scouts — which was amazing. We had toiletry items that were donated as well, so we were able to put those in those packages for the members’ families,” she says, “just to let them know that we are thinking about them at this time while their members are deployed.”

They put together 50 packages that will be delivered to the families this week.