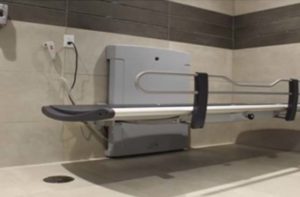 The latest state rest area to get an upgraded building is now open along I-80 near Victor between Grinnell and Iowa City.

DOT director Scott Marler told the Transportation Commission at their recent meeting that it continues the plan of having a theme. “The theme of this one is ‘The Land Between Two Rivers.’ That’s actually what Iowa means, the land between two rivers, and that was selected for this rest area,” Marler says.

The new rest area buildings are larger than the ones they replace and Marler says this one has a new feature known as an adult changing station. “This is the first of its kind in Iowa — and I will even say one of the first in the nation,” Marler says.

He the table is in the family bathroom that is now included in the new buildings. “These adult changing stations provide an adjustable table to help family and friends address the needs of loved ones who require assistance attending to their personal care in a restroom,” he says. The tables are a larger version of the child-changing tables that are used for kids. 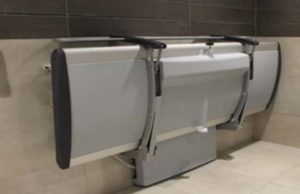 Marler says the Iowa Legislature has proposed some legislation in recent years regarding adult changing tables — but they aren’t waiting for that. “We decided in Iowa we are just going to go ahead and install these regardless of whether the legislation is in place or not,” Marler says. “The response to these has been overwhelming as you can imagine.”

The DOT’s Rest Area Administrator, Steve McMenamin, says they plan to add more adult changing tables into existing rest areas. He says it takes some time and money because in existing buildings they have to move around some things to fit them in.
“What we’re going to do initially is kind of scatter them across I-80 and I-35, every other one in the already newer buildings that have room for that — they have a family room already,” McMenamin says. “We’d just be expanding that and changing the layout in that family room to make room for that table to go in there.”

He says it is not cheap to retrofit the buildings for the adult changing tables. “It’s $44,000 per building for four buildings each year until we get all the newer style converted,” he says. “I think that may be a little conservative. We about have to do a modification and see. Another thing is just getting someone to do the work. It’s a difficult time for construction.”

McMenamin says the new style buildings have been well received, especially the various themes and information they provide.