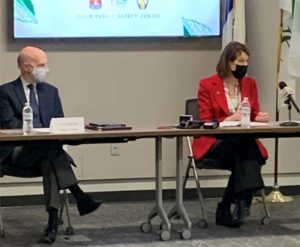 Congresswoman Cindy Axne met with mayors from the Des Moines metro and smaller cities like Greenfield and Griswold to discuss how to seek the new federal funding available for infrastructure projects.

Clive Mayor John Edwards said Walnut Creek frequently floods areas of his city. “The funding from the infrastructure bill and the American Recovery Act are key especially as you know here for stormwater and flood mitigation,” Edwards said, “and it’s going to help us, in particular, to become more resilient to the flooding, the intense rain events.”

Small city leaders expressed concern the federal funding would flow mainly to larger cities. The mayor of Runnells said his town of 500 residents is trying to find a way to pay for the $5 million cost of rebuilding its waste water plant. Axne promised to connect smaller towns with grant writers and she handed out a list of state officials who’ll help decide which projects get funding.

Iowa stands to get about $5 billion for roads, bridges, broadband, and water projects over the next five years from the infrastructure bill that cleared Congress this fall. “I’m proud to say that all of Iowa will benefit because of my vote,” Axne said.

Axne, a Democrat from West Des Moines, and Republican Senator Chuck Grassley were the only two members of Iowa’s congressional delegation to vote for the infrastructure package.