You are here: Home / News / Enjoy the eagles, they are about to be less visible 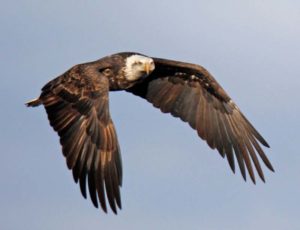 Iowans are spotting vast numbers of bald eagles this winter, but time’s running out to admire the big birds.

More than 400 eagles were counted recently along one mile of the Iowa River in Johnson County, but DNR wildlife biologist Stephanie Shepherd says nesting season is almost here, and that means it’ll be much harder to find eagles.

“They can begin as early as February and sort of the peak of them initiating nesting is in March, so they’re actually going to be breaking up here pretty soon, probably in the next three weeks or so to start getting back to their nest sites and initiating that nesting cycle,” Shepherd says. “I think we’re probably going to see numbers dwindling a little bit over the next few weeks.”

While many of the eagles we’re seeing are migrating here from states like Wisconsin and Minnesota, Shepherd says Iowa has many hundreds of resident eagles.  “We probably have at least 500 active nests in the state but of course they’re not as gathered together or congregated around open water sites,” Shepherd says. “There’s still a lot of eagles here, it’s just they’re spread out across the countryside, hanging out in their nest and being busy and not congregated around open water.”

The Mississippi River has traditionally hosted Iowa’s highest eagle numbers — both resident and wintering — but in recent years, the Iowa and Des Moines rivers have hosted even more.