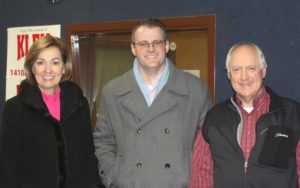 The governor visited the northwest Iowa town of Sioux Center to announce an award for the Lewis and Clark Regional Water System.  Reynolds says the $12 million reward will allow for a significant expansion and provide 15 million more gallons of water a day to the communities that include Sioux Center, Hull, Sheldon, Sibley, and Rock Rapids.

Reynolds says this money will help a project that was started more than two decades ago. “The project was authorized by Congress in 2000 and ground was broken in 2003. And nearly 20 years later, the system is 86 percent complete, and full completion is dependent on federal funding,” Reynolds said.

Reynolds says the water project is unique when having three states working together. She says she has visited with her border colleagues about having South Dakota and Minnesota step up so the project can be completed by 2023. She says this is a key project for the future of Sioux Center. Reynolds says it’s important to make sure they have the drinking water capacity for now — and to drive economic development in the future. She says the expansion of the water capacity keeps up with the gains they’ve already made.

“They’ve seen significant growth happening in the northwest region, so I think it is imperative that they move from 45 million gallons a day to the 60. And so that’s part of the plan also,” Reynolds says. “And as we were talking to them we continue to see additional money coming into the state for infrastructure, so it’s my hope that there will be additional funds from the federal level that will help them complete the existing project and then move to the expansion.”

Reynolds also announced $11 million in funding for a project at the “Field of Dreams” in Dyersville. The governor’s office says the project will serve 114,000 Iowans across two counties and create approximately 350 jobs.

The ICON Water Trails Project in downtown Des Moines was awarded up to $15 million. The project would remove safety hazards associated with a dam on the Raccoon River and lay the groundwork for a recreational destination in the area.

The project is expected to create more than 150 jobs and more than 100 million dollars in increased local revenue.