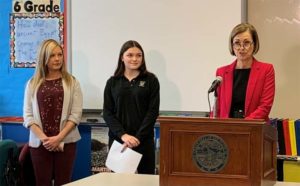 Governor Kim Reynolds is making another public pitch for her plan to establish 10,000 state-funded accounts for parents who wish to send their kids to private schools.

“We’ve made a lot of concessions and compromises with the new bill that I put forward this year,” Reynolds said late this morning, “but we’re going to continue to work with legislators and listen and do what we can to get it across the finish line.”

The governor’s bill has yet to advance out of a legislative committee, but a Senate panel is likely to debate it this week. A key Republican, though, said the concept is stalled in the House. Reynolds said she’s not giving up.

“I feel really good about it,” Reynolds told reporters. “We are having a lot of conversations. We’re talking about what the bill actually does.”

Reynolds held a news conference at a private school in Des Moines to tout her plan for state scholarships to parents like Jessica Cashman, a single mother who’s sending her daughter to St. Theresa’s Catholic school. Cashman said she wants her daughter’s school to align with the values she’s teaching her at home.

“The biggest factor is that I want to make sure I lay down a foundation…in my five-year-old child,” said Cashman, who has received a private scholarship to St. Theresa’s for her daughter. “Foundation to me is a love of God, education and country.”

According to the governor, 56% of the state’s budget is being spent on public schools and Reynolds said that’s money well spent for most, but not all families who’d be able to use the state-funded scholarships she hopes to create.

“I believe with all my heart that this is going to raise all of our school districts across the state,” Reynolds said. “You know, competition does that.”

Charlotte James, a junior at Dowling Catholic High School in West Des Moines, said when she speaks with friends who don’t attend her school, they “often wish” for the experiences she’s having at Dowling.

“By offering these scholarships to students, there’s more of an opportunity for those who want to push themselves and succeed,” she said during the news conference.

The governor’s plan calls for depositing about $5300 in state money in accounts for low and middle income parents who either move their child from a private to a public school or enroll their child in the kindergarten at a private school.