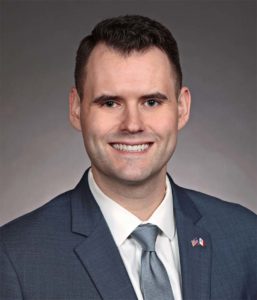 Democrats say the Republican tax plan making its way through the state legislature today gives the biggest benefits to the richest Iowans.

“So for every dollar in tax relief that your average Iowan is getting, the ultrarich are getting $112 in tax relief,” Senate Minority Leader Zach Wahls said, “so when Democrats say this plan rewards wealth, not work — that’s what we’re talking about.”

Earlier this month, Wahls and other Democrats in the legislature proposed expanding the child and dependent tax credit and the earned income tax credit, to benefit low and middle income Iowans.

“If Republicans want to provide real, targeted tax relief for middle class families, they should accept the Democratic fair tax plan, but they don’t,” Wahls, a Democrat from Coralville, said earlier this afternoon. “They’re more focused on the ultrarich who fund their campaigns.”

Wahls told reporters the GOP tax plan does nothing to address the state’s most pressing issue — its workforce crisis.

“They are going to make it exceptionally difficult for our state to provide the essential services that everyday Iowans depend on,” Wahls said. “I would say that this plan is not fair, it’s out of touch and it’s completely disconnected from the lives of everyday Iowans.”

Senate debate began shortly after two o’clock this afternoon and about 90 minutes later it passed on a 32-16 vote. Democratic Senators Tony Bisignano and Kevin Kinney joined 30 Republicans in voting yes. All 16 no votes were from Democrats.

The bill now goes to the House for debate.

Representative Dave Jacoby, a Democrat from Coralville, said “it’s shocking” the GOP picked this day for a massive tax debate.

“I think everyone’s focus is what’s going on over in Ukraine right now,” Jacoby told reporters.

Jacoby said the lingering pandemic and Russia’s invasion make it difficult to expect the economy will grow as steadily as Republicans project. He also cited early estimates that indicate nearly 500,000 Iowans won’t benefit from the tax cut.

“I’m just a little nervous that we’re doing something that doesn’t help a majority of Iowans,” Jacoby said.

(Check back for updates on this developing story)