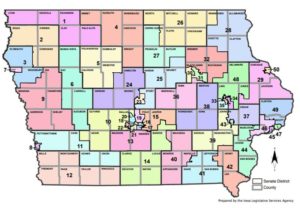 Members of the Iowa Senate are typically elected to four year terms, but due to the once-a-decade redistricting process, some winning state senate candidates this November will be elected to two year terms.

General Elections are held every two years and half of the 50 seats in the Iowa Senate are always on the General Election ballot. In 2022, candidates in the 25 districts labeled with odd numbers will be seeking four-year terms. Secretary of State Paul Pate has announced another nine state senate races in even-numbered districts will be on the ballot, too, and the winners will serve just two years.

This is because redistricting redraws the boundaries and renumbers senate districts and the terms for some incumbents don’t match the rotating election schedule for odd and even numbered districts.

Members of the Iowa House serve two-year terms, so all 100 House races are on the ballot every two years.