You are here: Home / Sports / Iowa’s Clark is B1G Player of the Year 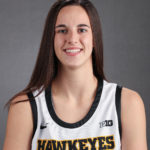 Iowa sophomore Caitlin Clark has been named the Big Ten Conference Player of the Year..

The native of West Des Moines is the seventh Hawkeye in program history to be named Big Ten Player of the Year and the fourth in five seasons.

Clark averaged 27.5 points, 8.3 assists, and 7.9 rebounds per game in 27 games. She registered 17 20-plus point games, including 10 30-plus point games. She recorded back-to-back 30-point triple doubles in January, joining the likes of Kobe Bryant, LeBron James, Russell Westbrook, James Hardin, Luka Dončić and Giannis Antetokounmpo as the only NBA, WNBA, Division I men’s and women’s basketball to record the feat since 2000. Clark has 1,542 career points and was the fastest Division I player, men’s or women’s, to reach 1,500 career points over the last 20 seasons.