You are here: Home / Fires/Accidents/Disasters / Red Haw State Park won’t be open for some time after tornado 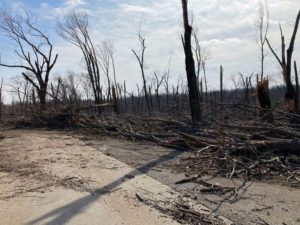 The Director of the Iowa Department of Natural Resources says it is going to take some time to clean up the damage to the Red Haw State Park near Chariton which was hit by a tornado Saturday.

Directory Kayla Lyons updated the Natural Resources Commission today. “The campground sustained some substantial damage — and unfortunately there was one fatality there,” Lyons says. Forty-year-old Jesse Fisher of Chariton was camping at the park and died in the tornado.

Lyons says she visited the park as DNR employees were assessing the damage. “The park is going to be closed for quite some time. There was also significant damage to the beach, the dock, the bait house, the beach shelter, the storage building,” she says. She says they are not letting anyone in the park.

“We ask that the public stay out of Red Haw right now — it is just not safe to be there. ?We’ve got a lot of people working to get it cleaned up as fast as possible,” according to Lyons.

Lyons says the tornado destroyed many trees — which were a key feature of the park. “Red Haws’s campground had a very mature tree canopy there. The foresters that were there marking trees said a lot of those trees that were in the campground were 100 to 125 years old. So, the park is certainly going to look different going forward,” Lyons says.

The tornado that hit the park was one of 13 the National Weather Service has confirmed from Saturday and Fisher was one of the seven people killed in those storms.