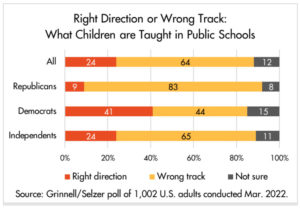 A new national poll by Grinnell College finds teaching about racism is a big factor in the lack of trust in public schools.

Poll Director Peter Hanson says the mistrust is large. “We asked our respondents whether or not they believe that public schools are on the right track or the wrong track in terms of what they are teaching in the classroom,” Hanson says, “and 64% of the people said that public schools are on the wrong track. And that included almost all Republicans — but even a plurality of Democrats.”

He says they broke down the issues in three questions. “Most Americans trust the choices that schools make about libraries –71%. Most Americans trust schools to make good decisions when a student is at risk of doing something violent — 69%. But only 49 percent trusted the ability of schools in terms of teaching about racism in the United States,” Peterson says.

He says a further examination of the numbers reinforces the point. “Those who don’t trust schools teaching about racism were much more likely to say that schools were on the wrong track So, it really seems this continuing debate over how to teach racism in the classrooms is driving negative views about schools overall,” according to Peterson.

Peterson says the concerns about the teaching of racism stand out again when they questioned if students should be taught to respect people of different races. “Sixty-nine percent of people said that that was essential — that they did want respect for people of different races to be taught in school,” he says. Peterson says this shows where the fault line is in how people think about how to teach about race in schools.

The poll was conducted in a partnership between Grinnell College and Ann Selzer of Selzer & Company.