You are here: Home / News / U.S.D.A .releasing another round of grants for meat lockers 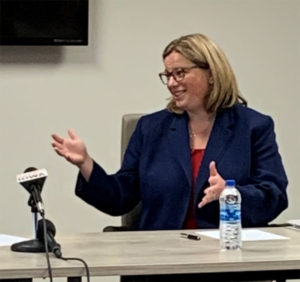 A top U.S.D.A. official who’s visiting Iowa says containment is key now that highly-contagious bird flu has been detected at six poultry sites in Iowa. Jenny Lester Moffitt is the Under Secretary for Marketing and Regulatory Programs at the U.S. Department of Agriculture.

“So far the data shows that we’re really not seeing spread between producers, but we’re always reminding producers about biosecurity,” said Moffitt, who spoke with reporters earlier today, right after she and Iowa Congresswoman Cindy Axne of West Des Moines met with Iowa meat locker owners and others connected to the industry.

Moffitt said the U.S.D.A. is releasing $23.6 million in a second round of grants for existing meat lockers. The grants can be used for things like equipment and marketing.

“We need more and better markets for producers,” Moffitt said. “Producers need more places to be able to bring their cattle, their sheep, their swine, their bison to market — all sorts of different animals.”

The agency has signed contracts with three firms that will help meat locker owners complete the grant applications. Moffitt said grants can be used to help lockers get certified to sell meat across state lines — and she heard from Iowans at the event who lobbied for more U.S.D.A. meat inspectors.

A few participants mentioned ethanol promotion, too. Axne said she spoke last week with the EPA Administrator about ensuring E15 — gasoline with 15% ethanol — can be sold year round in every part of the country.

“I’m going to hit some people over the head pretty soon because they’re not understanding the logic here,” Axne said, laughing along with the group, “and we need them to just be logical and help us get ethanol out the door.”

The vast majority of gasoline sold in the U.S. is E10 — a 10% ethanol blend. E15 sales are banned from June 1 through mid-September in many areas of the country, however. Axne said expanding E15 sales year-round means consumers would have access to a less expensive fuel.

“There’s a war with Russia and Ukraine. We are seeing prices go up at the gas pumps, so let’s put our own product out there across the country,” Axne said after the event. “We have the capacity to do it.”

A federal appeals court tossed out a 2019 Trump Administration move to allow E15 sales year round. The ethanol industry has asked for a panel of judges to review the case.