You are here: Home / News / Attorney General survives challenge to his paperwork for the June Primary 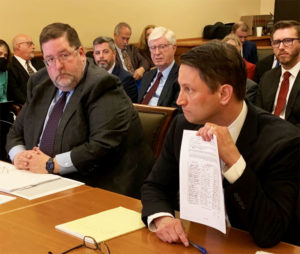 Iowa Attorney General Tom Miller has survived a challenge of his nominating forms for the June Primary ballot — but just barely.

The State Objection Panel upheld some objections to people who signed Miller’s nominating petitions and wrote down a post office box number instead of the physical address of their residence. However, the panel found Miller had submitted enough signatures in 18 counties, the minimum required. In dramatic fashion the final county’s tally showed Miller had just one signature to spare.

“It was close, but I think by the standards of previous decisions here and the court, clearly they made the right decision that I should be on the ballot and I will be and look forward to the rest of the campaign,” Miller said.

The Objection Panel is reviewing nominating petitions for five other candidates this afternoon.