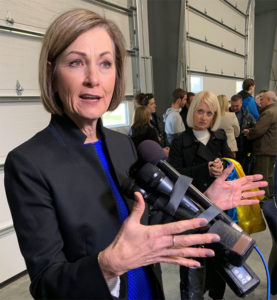 Governor Kim Reynolds is urging her fellow Republicans in the Iowa House to approve her plan to provide state-funded scholarships to parents who’ll be enrolling their children in a private school.

All but one Republican in the Iowa Senate voted for the plan last night, but — for a second year — it hasn’t come up for a vote in the House.

“I’m going to be optimistic, right up until the end,” Reynolds told reporters yesterday, before last night’s vote. “It’s part of the process.”

Some Republican lawmakers who represent rural areas say there are few, if any private school options for parents in their districts and that’s why they oppose the bill. Reynolds submitted a revamped plan this year that not only provides state money to parents cover the costs of private school expenses, but there’s additional money in it for public schools in rural areas.

“Every day, when I talk to parents, it underscores how important it is to give parents the choice in their child’s education, to pick an environment that’s conducive to them, and it shouldn’t just be available to parents who have the resources to do it,” Reynolds said. “That is fundamentally wrong.”

Under the Senate-passed plan, parents with an annual income at or below 400% of the federal poverty level would be eligible to apply for the state scholarships. That means a family of four could have an annual income of up to $110,000 and qualify and get $5500 from the state to cover private school expenses.

“You’ve heard me say a hundred times education is the great equalizer and every parent needs to be able to make that choice, whether they have the funds or not,” Reynolds said, “and so we’re going to keep fighting on behalf of parents.”

The union that represents teachers — the Iowa State Education Association — said the governor’s plan calls for spending $55 million on 10,000 students, while the public schools that serve nearly half a million students need more state support.