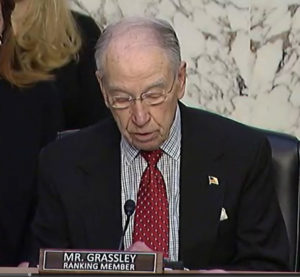 Iowa Senator Chuck Grassley is a “no” on President Biden’s nominee to the U.S. Supreme Court.

Grassley said he and Judge Ketanji Brown Jackson have “fundamentally different views on the role judges should play in our system of government.”  In written remarks prepared for delivery at the Senate Judiciary Committee meeting, Grassley described one of Jackson’s rulings as “extreme” and he said Jackson’s “approach to criminal law and sentencing” is too lenient.

Grassley also accused the Senate’s Democratic Leader of opposing Republican President George W. Bush’s nominees to the high court on ideology alone, so Grassley said that means he and other Republicans in the Senate no longer need to “defer” to a Democratic president’s choices for the Supreme Court and vote yes if that person is qualified.

Grassley and the rest of the Senate Judiciary Committee are voting on Judge Jackson today. The full Senate will vote on the nomination this week.