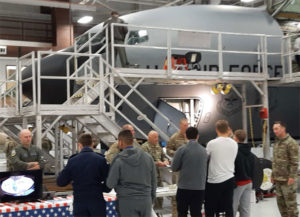 One of the exhibits at the 185th Air Guard career day. (KSCJ photo)

The 185th Air National Guard Refueling Wing held a first-of-its-kind job fair at the base in Sioux City Wednesday for dozens from area high schools and colleges.

Lieutenant Colonel Jennifer Carlson coordinated the event which featured more than 90 jobs or Air Force specialties. “We have people who sit in those career fields that can talk about what they’ve experienced, what the training is like, what the normal day-to-day job looks like, and they also have equipment here,” Carlson says.

Carlson says there are a wide number of career possibilities to consider for the students, who can receive paid technical training in the Air Guard, along with obtaining undergraduate college credit. “Medical, we have civil engineering, computers, security forces, personnel and admin, religious affairs, so our chaplains. We have the equal opportunity down here as well,” Carlson says. “We have logistics, moving people and things. We have fire departments, so if you want to be a firefighter, we have that as well.”

She says the traditional careers in the National Guard allow members to attend training primarily on weekends plus two weeks each year while also attending college or working full time at a civilian job.
A list of jobs and recruiter information can be found on the 185th Wing website careers page.