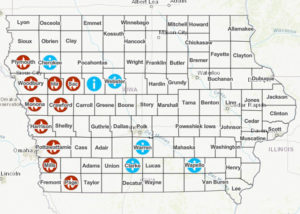 Grass and field fires remained a big problem this past weekend in western Iowa and bordering states where things remain very dry.

Sergeant Bluff Fire Chief, Anthony Gaul says his firefighters worked several hours responding to calls Saturday, and every area department was busy. “There were so many fires going on that departments had to travel 20 and 25 miles to help manage incidents because there was nobody else available,” he says.

Gaul says the local area damage total from the weekend fires will be more than seven figures as the burn ban in Woodbury County remains in place. “One community wants to opt-out of it but the amount of dollars that were lost in Woodbury and Plymouth and then across the river and those counties if you add it up is over one million dollars. I know Plymouth County had a piece of apparatus burn up,” Gaul says.

Chief Gaul says the strong winds of up to 60 miles an hour at times contributed to the fires. “One of the fires in Woodbury County was caused by a downed power line which we can’t control that. But others have mentioned hey, we’ve had some rain and yes, we have had some rain but with that wind, it has dried everything out and there is so much out there that’s just ready and able to burn that. We can’t ask enough to stop, not do it,” Gaul says.

He says you need to think twice before starting any kind of fire outdoors when conditions are as windy and dry as they have been. Even if you are using a burn barrel.

“We’ve had quite a few incidents caused by burn barrels which can be legal throughout the burn ban but there are requirements that you can’t have more than a one inch opening with a grating,” according to Gaul. He says there are code requirements for burn barrels on the State Fire Marshal’s website. There are ten active burn bans in the state as of Monday — with all of them along the western edge of the state.