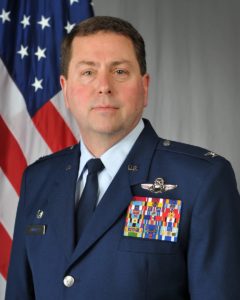 “I’ll just tell you it’s a truly unbelievable opportunity and I guess most importantly it is a result of the outstanding performance of the Airmen of the 185th,” he says. “It has truly been my privilege to lead this team over the last three years.”

Colonel Muckey will take over as Adjutant General of the Iowa Air National Guard and will be reassigned to the Guard’s headquarters in Johnston.

Colonel Sonya Morrison, an Osceola native, will be his successor in Sioux City as the 185th Refueling Wing’s commander. A change of command ceremony is tentatively scheduled in August.