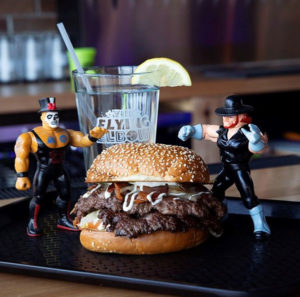 A restaurant named after a pro wrestling move has pinned down the title of “Iowa’s Best Burger” for 2022.

The “Flying Elbow” in Marshalltown was started by Garrett Goodman. “The Flying Elbow, your classic 80s 90s pro wrestling scene hotdog and burger restaurant,” Goodman says with a laugh. “You know, there’s a ton of those around, but no, I kind of started it out of a food truck in 2017 and just kind of liked the scene. You know, I grew up watching pro wrestling from the 90s and then I got into the 80s stuff.”

The love of pro wrestling led him into the name when he opened the restaurant. “So the flying elbow is actually Macho Man Randy Savage’s finishing maneuver. So he would get on the top rope and yeah it’d be him and Miss Elizabeth out there and he’d get on the top rope and he pointed his arms and skies and dropped the flying elbow and so I just thought it was kind of a catchy name and kind of just started with it and rolled with it,” according to Goodman.

The burger taking the spotlight in the contest is his favorite. “It’s called the Tombstone, and it’s basically just a spicy BLT type of burger that comes with sour cream, guacamole, tomato, lettuce, bacon, Manchego cheese, which is kind of like a creamy white cheese, and then it also has Death Valley hot sauce — which you can get on the side if you don’t like spicy,” Goodman says.

Goodman is a Marshalltown native with some cooking in his family background, and says switching to a non-moving platform has been great. “Coming from the food truck — which is basically like going camping every single day — you know you got you’ve got limited amounts of water and power and it’s just a whole set of different challenges in the restaurant,” he says. “Really happy to be involved, you know, have a brick and mortar restaurant it’s really opened up a lot of opportunities to do different things.”

Like pro wrestling — there was a good comeback story after the July 2018 tornado destroyed the restaurant. Goodman worked on financing to rebuild when the COVID-19 pandemic hit. He finally re-opened in September of 2021 at a site on North 13th Street in an area that was being redeveloped.

Goodman didn’t put burgers on the menu until January of this year — and they weren’t originally going to be permanent.  “It was meant to be a special and the first three days we sold out and basically did the same amount of sales that week as we did all of January and it’s kind of like well I think people kind of like what we got going on here,” he says.

He says he didn’t want to have burgers and just tell people to use the same toppings they used on hot dogs, so he created new toppings for the burgers. He has burgers that are designed to be like some of the iconic American hamburgers — without infringing on trademarks. The spotlight from the “Best Burger” contest has already boosted burger sales.

“Basically since I’ve got added to the top ten, we’ve seen pretty much a 35 to 40 percent increase in business — and I’ve been told you can see up to a 70 percent increase when you win,” he says. Goodman was busy Monday answering phones and greeting customers after the Iowa Beef Industry Council and Iowa Cattlemen’s Association announced he’d won the contest.