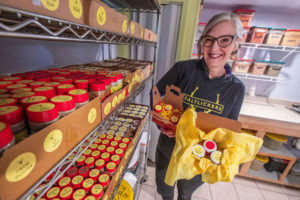 A small business owner in the central Iowa town of Nevada is marking her tenth year in business and she gives a large part of the credit to a program at nearby Iowa State University.

Jennifer Knox runs Saltlickers out of her home kitchen, a company that offers more than two dozen types of cooking spices, including flavors like Cy Salt, Herky Perky and Iowa Nice Spice.

“We have a very unique product,” Knox says. “It is something that you can add to cooking to make your cooking, no matter what it is, taste good. It’s like our product helps them be the cooks that they want to be.”

Knox says she’s always enjoyed cooking foods from different places around the world and once she purchased a dehydrator, she was hooked on homemade spices. “I dried the heck out of everything,” Knox says. “I ended up making Christmas gifts, then I did a little market in Brooklyn, a holiday market and I made $3,000 that weekend and nothing like that had ever happened to me before. I thought, ‘This is paydirt. I have to keep doing it. People like it.'”

When she first launched the business, she was living in a small apartment in Brooklyn, New York, and says she never could have succeeded in such a crowded metropolis.  “This would not exist if I was still trying to do this in New York,” Knox says. “We grow every year to the point that we can handle it.” Knox decided to move to central Iowa where she’s now also an English professor at ISU. She says she’s consulted the Small Business Development Center and the Center for Industrial Research and Service at ISU on a host of challenges.

“At every step that we come to that seems insurmountable, there has been somebody there from Iowa State to help us out,” Knox says. “They helped us streamline the process and do it for a price that we can stay in business.” Officials with the centers say they’ve helped thousands of other businesses across the state, creating an economic impact measured in the billions of dollars.