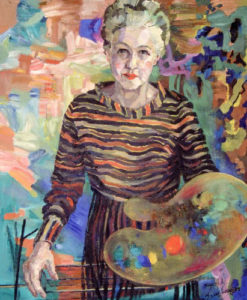 Maverik. (Photo courtesy of the Cedar Rapids Museum of Art.)

The life’s work of the first person to receive a master of arts degree from the University of Iowa in 1924 is being celebrated in a special exhibition now open at the Cedar Rapids Museum of Art.

Museum curator Kate Kunau says Eve Drewelowe was a New Hampton native who remained relatively unknown during her long career but who did stunning, vibrant work.

“She starts in the ’20s and she’s representational and she does beautiful landscapes and figure studies and still life,” Kunau says. “Like a lot of people in the art world, in the ’50s and ’60s, she starts getting into abstraction and has her husband make her these distinctive round canvases integrating mixed media into her work.”

Drewelowe was married to the dean of the University of Colorado at Boulder and around age 40, she had a health emergency that demanded surgery, something that made her reassess herself. “She kind of had a rebirth and decided that she was retiring from her position as dean’s wife and all the social obligations therein,” Kunau says. “So after that, she really concentrated solely on her art, and she was incredibly prolific. She produced over 1,000 paintings and drawings during her lifetime.” 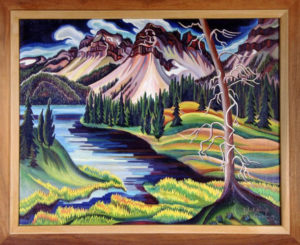 After Drewelowe died in 1988, the large collection was gifted to the University of Iowa. From the hundreds of works, Kunau narrowed it down to 23 pieces for the exhibition, including a self-portrait Drewelowe painted in 1984 (when she was 85) which she entitled “Maverick.”

“The works that I chose are mostly from the ’30s through the ’50s and are a lot of her mountain landscapes and figural pieces,” Kunau says. “I wanted to include ‘Maverick’ because I kind of have a triumvirate of self portraits that she did at different points in her career and ‘Maverick’ is very much a celebration of where she was as an artist towards the end of her life.”

Many of Drewelowe’s paintings feature spectacular colors with swirling, contorted perspectives which Kunau says are simply fun to gaze upon. The exhibition, “Eve Drewelowe: Painting Her Way,” will be on display through late August.