You are here: Home / News / Richard Johnson, state auditor for 25 years, has died at age 87 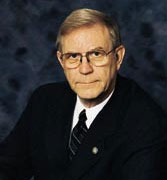 The current state auditor has announced that former State Auditor Richard Johnson died earlier today at the age of 87.

Johnson, a Republican, served 25 years as State Auditor before his retirement in January of 2003. Johnson began working in state government in 1968 and served as the finance director of what was then called the Iowa Highway Commission. In late 1978, the state auditor died. Governor Robert Ray appointed Johnson to the office in early 1979 and Johnson won reelection as state auditor six times.

In the 1990s, Johnson joined State Treasurer Mike Fitzgerald, a Democrat, in pushing for state government to use accounting standards that more clearly showed both revenue and expenses. In 1996, Johnson endorsed and actively campaigned for then-Congressman Fred Grandy as Grandy ran against Governor Terry Branstad. Grandy came within 3.6 points of defeating Branstad in the GOP Primary that year. The legislature passed a resolution in 2002, praising Johnson for his political courage.

Current State Auditor Rob Sand has released written statement, extending his condolences to Johnson’s family. Sand said Johnson’s record is a source of inspiration for him and for others in the office.

Republican Party of Iowa Chairman Jeff Kaufmann released a written statement. “For more than two decades, Dick watched our tax dollars the way a family guards its bank account,” Kaufmann said. “He would spot any misuse of tax dollars, and call it out regardless of party or person.”